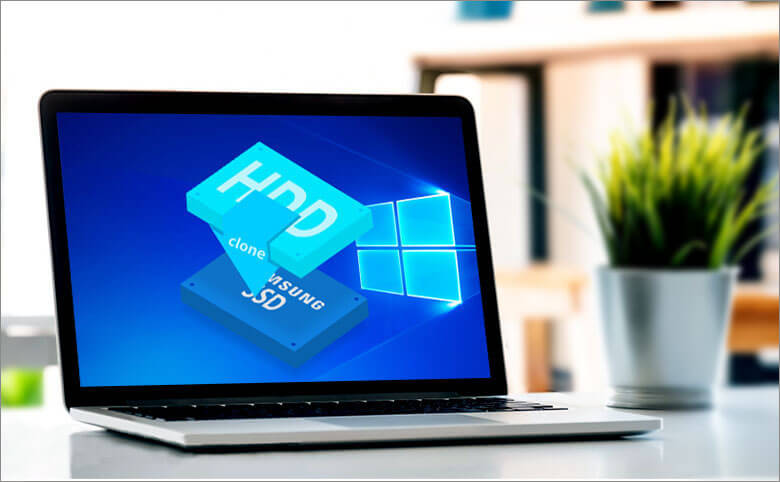 Due to superior performance of SSD over HDD, nowadays many people intend to upgrade their old hard drive to SSD in order to get a smoother user experience with their computers. Therefore, Samsung SSDs have gradually become the choice of more and more people because of its high reputation.

If you have a Samsung 860 EVO SSD, how can you copy all the contents from your original HDD to the SSD without reinstalling the Windows OS and applications? Well, this problem will be addressed in this article. In the following part of this passage, you will learn how to clone HDD to Samsung SSD in Windows 10 computer with two easy ways.

Part 1: Why People Want to Clone HDD to Samsung SSD

1. Better Performance of Computers. As we all know, compared with original HDD, SSD has more merits in many aspects, no matter in terms of read-write speed, storage capacity, or stability. Upgrading or replacing the original HDD to Samsung SSD can help your computer work faster and perform better. Based on this point, more and more people are willing to clone HDD to Samsung SSD.

2. Data Loss Prevention/Data Backup. You must have stored lots of important data on your hard drive, such as programs, applications, files, documents, images, videos, or anything else. Sometimes an unexpected failure can lead to serious data loss. In that case, if you don't have a backup, you must go crazy. From this point of view, it is necessary to copy/clone data to another place. You can use a SSD as a backup disk. So next time when you face the issue of data loss, you can get the lost data from the SSD disk. However, copy and paste cannot clone all the hidden files and configurations to another SSD. Therefore, you need a way to help you clone HDD to SSD effectively.

3. Expansion of Computer Storage. Don't have enough space for data storage on your hard drive? "Using SSD as OS drive and HDD as storage drive" is a good strategy for you. As SSD has more advantages than HDD, you can copy the Windows OS from HDD to SSD and then boot your computer from the SSD to get a faster running speed. And then you can use the original HDD as a storage drive for to extend computer storage.

Before you start to clone HDD to Samsung SSD, you need do the following several preparations first of all so that you can proceed with the cloning operation smoothly.

2. Connect the Samsung SSD to Your Computer and Initialize It. After you have prepared a suitable Samsung SSD (e.g. a Samsung 860 EVO SSD), you need connect the SSD to your Windows computer. Then open Disk Management to initialize the new SSD drive and allocate unit size for Samsung the SSD.

Now it comes to the most crucial part of this passage - How to Clone HDD to Samsung SSD. In this part, you will learn two options to clone HDD to Samsung SSD. One is to do the data migration with Samsung Data Migration (SDM) Software, and the other one is to clone hard drive with Cocosenor Backup Tuner (what we have mentioned above). You can choose the more suitable one based on your situation.

Step 1: Free download the Samsung Data Migration software from Samsung official website and install it on your Windows 10 computer. Then start the software. 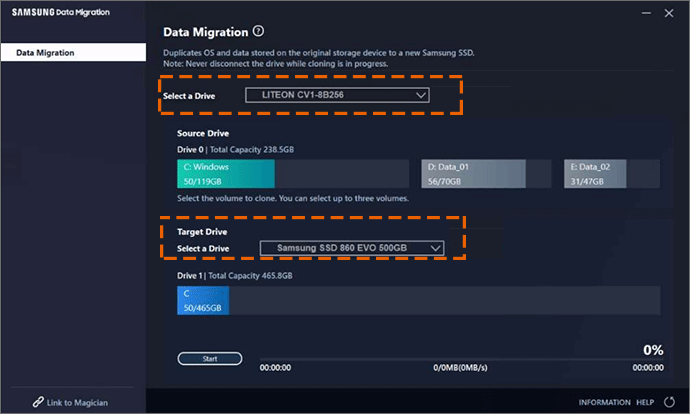 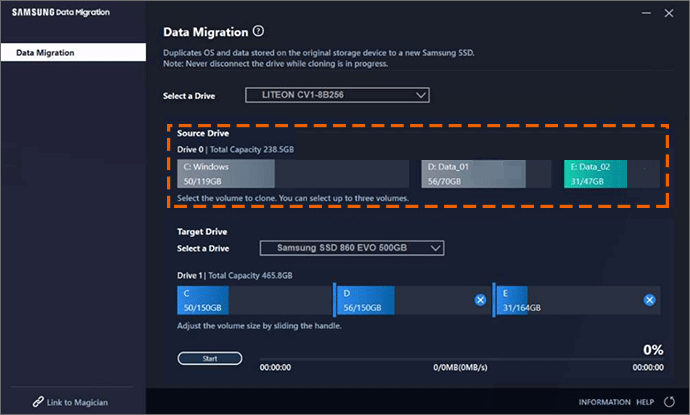 Step 4: After you have defined the Source Drive and Target Drive clearly, you can click on the Start button to start the cloning process. The cloning speed may vary depending on the computer specifications and operating environment. Then wait for the process to finish.

Although using Samsung Data Migration Software to do data migration is a feasible way, it also has several limitations and drawbacks. For example, you can just select up to three volumes including the C: volume to clone. And Samsung Data Migration software can only clone a Source Drive on which an operating system has been installed, which means that a drive without an operating system installed on it cannot be cloned by the software. In addition, this software may not function properly in some cases… If you want a more effective way, Option 2 is a better choice.

Option 2: Clone the HDD to Samsung SSD with Backup Tuner

Step 1: After you have installed Cocosenor Backup Tuner on your Windows computer, start it and click "Disk Clone". If you only transfer only Windows OS to Samsung SSD, you can click here for reference. 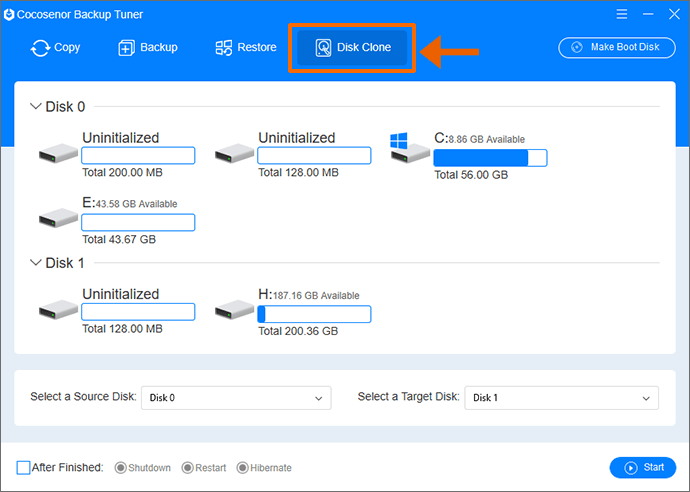 Step 2: From the drop menu of "Select a Source Disk", choose the old HDD as the source disk. 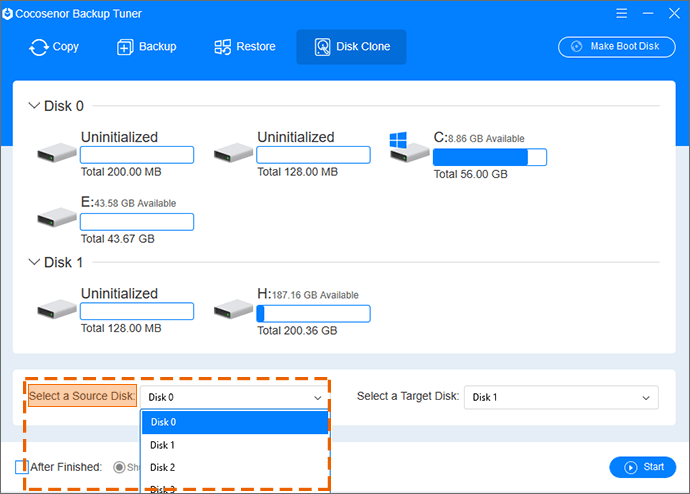 Step 3: From the drop menu of "Select a Target Disk", choose new Samsung SSD as the target disk. 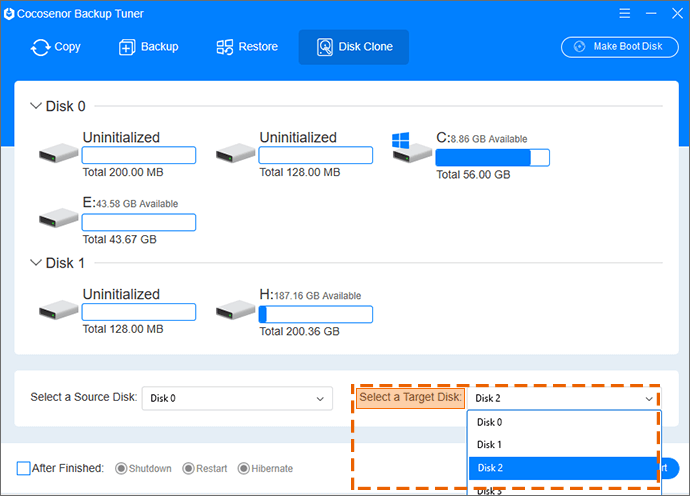 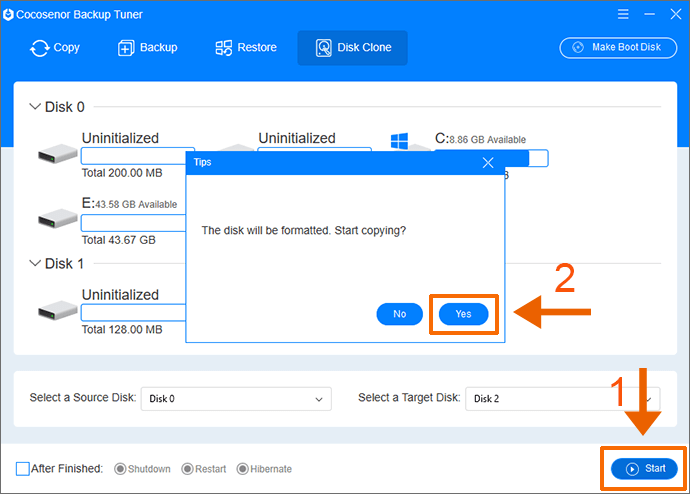 Step 5: Wait for the cloning process to complete. Then all the contents in the HDD will be transferred to the Samsung SSD including the Windows OS, applications and other data.

That's all about how to clone HDD to Samsung SSD in Windows 10. Both the above two options can help you clone HDD to Samsung SSD easily and effectively. You can choose one according to your situation. Anyway, using Cocosenor Backup Tuner is more recommended as it is more powerful. After you have succeeded in cloning the HDD to the Samsung SSD, you can set your computer boot from the SSD if you want so that you can enjoy a better performance of your computer.